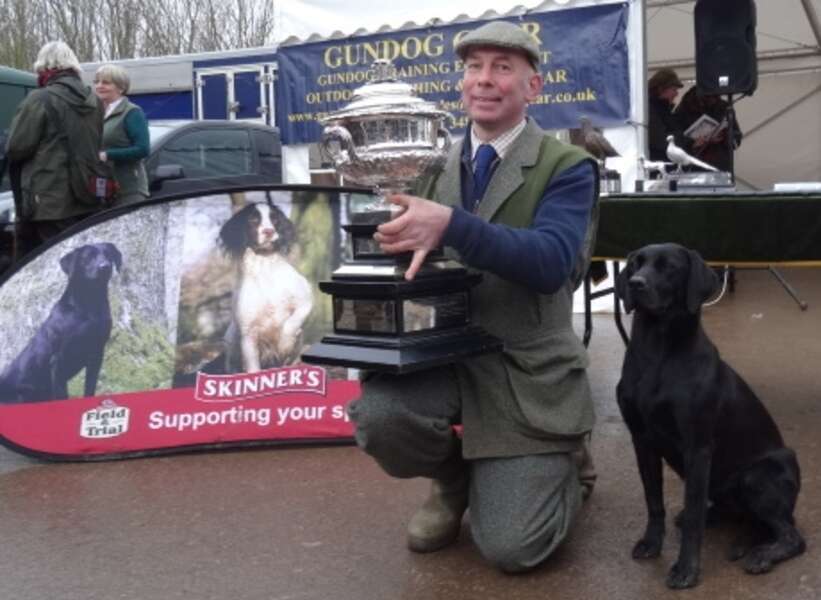 The Championship was very generously hosted on 4, 5 & 6 December by the Holden family at Out Rawcliffe in Lancashire where their Hy-Fly Game Hatcheries is well known not only for its long established game farm but also in more recent years for holding successful trials.

It was a rainy start to the first day as IGL President Terry Prentice and Secretary Sandra Onens greeted those attending by the marquee. Introductions and sincere thanks were made to the Holden family, for hosting and shooting at the trial, Head Keeper Kevin Hughes and his excellent team of stops and beaters, the highly experienced and well regarded judges, Roddy Forbes, Judy Rainey, Allan Schofield and Sara Gadd, the IGL’s principle sponsor Roger Skinner Ltd. and the other generous sponsors – Kennel Club, Gundog Gear, British Association for Shooting and Conservation, Paul French Video International, Susan Rose China, Pernice Press, Mercury Hearing, Fit and Fertile and Field Trial Management System – and finally thanks to Sue and Allan Schofield who had contributed so much towards the organisation of this year’s event.

The weather started to clear a little as the line set off walking up in fodder beat with judges Roddy Forbes and Sara Gadd on the right and Judy Rainey and Allan Schofield on the left.

Diglake Jasmin, needing no assistance from handler Dawn Scott, cleanly picked the first bird of the day, a marked retrieve. Baldariebank Bombshell of Denbank handled by Dick Sorley picked second dog on a bird shot some distance behind the line which had moved.

As the first round progressed, the spectators’ gallery enjoyed excellent viewing from an elevated track running alongside the expanse of fodder beet and the viewing proved to be good throughout the 3 days of the Championship. The spectators also had the benefit of an informative running commentary which they could follow on their radios using the designated channel.

FT Ch Leacaz Ricky of Caytonfell with handler Mark Demaine got off to a good start when the dog hunted stylishly to pick one of several birds that had been pushed over from an adjoining copse.

During a short break, the day was lightened by an impressive rainbow. Not long after, the only snipe shot that day was picked by Overthwarts Berwick, handled efficiently by Andrew Wright.

FT Ch Dunjailin Rocky Rogue of Westerkames handled by Kirsty Cousins showed excellent game finding as third dog on a duck shot over the right hand dyke and track, deep into the maize behind.

The team of guns impressed throughout the Championship by the high standard of their shooting. FT Ch Arkglas Thor handled by Leigh Jackson picked a pigeon which some remarked was the highest they had ever seen shot.

Kevin Hughes and his hard working team produced the birds in a seemingly effortless fashion, pushing birds over the guns from adjoining cover.   It was hard to believe that only 2 weeks previously this entire area had been several feet under water due to appalling wet weather conditions. The Hi-Fly team are to be congratulated for their efforts which ensured that this year’s Championship was able to go ahead.

Wayne Mitchell had a good first retrieve with Kelmagra Bramble of Labdom picking a bird shot tight into the opposite end of the line and in front of the gallery. FT Ch Harperrig Breac required no handling by Billy Steel when he made an extremely smart job of picking his first retrieve, a mark some distance in front of the line on the opposite side of the right hand dyke.

The last bird of the day was picked by Vicky Pritchard whose Vamp Angelica hunted stylishly to pick a white pheasant as light was fading and the scent conditions were becoming more challenging.

40 dogs were taken through to the second day which started fine with a light wind although it was to become colder as the day went on. Initially the line walked up in cover crop and stubble with a dyke running parallel the length of the field on the right hand side.

Early on gun Graham Holden shot a snipe more than 70 yards in front of the line across the right hand dyke. Steve Richardson handled FT Ch Birdsgreen Cluedo of Wedgnock to the fall area behind three other dogs and made a tidy job to pick their second round retrieve and earned some worthy applause from the gallery. David Latham with defending champion FT Ch Beileys Aguzannis of Fendawood made easy work of another snipe shot in front of the line into the cover crop. John Halsted with FT Ch Brocklebank Navigator of Chatsworth looked very smart as second dog winding a duck shot across the line and over a dyke just into the copse behind. Lee Hartis and FT Ch Troddenmills Beck and Call of Leacaz, after a series of dry runs, cleanly picked the last bird of the morning, a long mark across the line on grassy stubble, before a brief stop at midday.

The line then moved on to walk up in grassy stubble on the left hand side which was flanked by a large area of standing water from the recent torrential rains with maize behind and fodder beet on the right hand side, with woodland running parallel to that from which birds were driven in a series of mini drives. At the far end of this field was a dyke with a field of fodder beet the other side. Andrew Rooney earned applause from the gallery when his dog IR FT Ch Calderhey Evan picked a wounded duck across the water and back into the maize. FT Ch Harperrig Breac impressed again, requiring no handling to pick the 2nd of 3 ducks shot in the far corner of the fodder beet. John Halsted with FT Ch Brocklebank Navigator of Chatsworth showed the way when they picked a difficult technical retrieve – a long blind diagonally from the right hand side of the line across the fodder beet, stubble and then a dyke into the fodder beet beyond to pick. Unfortunately, a number of dogs tried here on similar retrieves struggled or even failed to make the area.

FT Ch Kestrelway Freddie was neatly handled by Norman Onens, as second dog, to pick a pheasant across and behind the line on the stubble. Wayne Mitchell’s Kelmagra Bramble of Labdom continued to show its pace and style, picking a tricky duck from the bottom of a water filled ditch in the third round. FT Ch Buccleuch Xena was quickly sent for a wounded duck which landed some way behind the line and in water. The dog was handled efficiently to the area and picked before the duck was able to make the maize behind. Sandicliffe Jude of Millershook was trusted by handler Paul Truby to pick a memory mark without any help on a duck shot tight to the line even when taken to and sent from the other end of the line. Jayne Coley’s FT Ch Flagonhall Hermes of Waterford was equally eye catching when taken to the other end of the line to pick behind the first two dogs tried on a partridge: the dog picked easily without any further guidance from the handler once sent.

Steve Richardson’s FT Ch Birdsgreen Cluedo of Wedgnock showed superior game finding ability in picking a partridge behind 3 dogs already tried. FT Ch Leacaz Ricky of Caytonfell picked possibly the longest retrieve of the day from the far corner of the dyke at the end of the field, smartly making the area and picking quickly.

At the end of the day the judges decided to take 13 dogs through to the third day.

The final day of the Championship produced some excellent dog work where from the start dogs were stretched, walking up in fodder beet, with a typical Championship line of more than 100 yards.

FT Ch Leacaz Ricky of Caytonfell displayed accurate marking ability on his first retrieve. FT Ch Kestrelway Freddie showed class on a running pheasant, picking it out of a deep sided dyke some 30 yards behind the fall. FT Ch Buccleuch Xena demonstrated nose, pace and style on long marks the full length of the line. Diglake Charlie handled by Steve Newitt made easy work of a retrieve off the end of the line which was across both a dyke and a track to pick from the edge of the wood behind.

Unfortunately, Steve Richardson with FT Ch Birdsgreen Cluedo of Wedgnock went first dog down on a running partridge which was not to be picked by the other 3 dogs tried or the judges and other dogs which had been going well also fell by the wayside.

The 5 remaining dogs were taken through for a drive where each picked a further 2 retrieves. The experienced team of markers included previous Championship winners and judges, Panel Judges as well as a winner of the Spaniel Championship.

FT Ch Brocklebank Naivgator of Chatsworth was not distracted by the ongoing shooting when promptly sent to pick a wounded bird and efficiently found without any help from handler John Halsted. Similarly, during the drive Mark Demaine’s FT Ch Leacaz Ricky of Caytonfell was sent for, and quickly picked, a wounded duck.   In addition, one of the pickers up, handling a team of Clumber spaniels, was dispatched during the drive to look for a bird that had fallen behind the spectators’ gallery.

During the course of the Championship he and FT Ch Buccleuch Xena impressed with the efficiency of their retrieving, picking stylishly in a seemingly effortless way and with minimal handling. FT Ch Buccleuch Xena is a dog that you want to watch all day long and it no surprise to learn that she has gone from Novice Field Trial winner to Retriever Champion in one season.  It is also of interest to note that her bloodlines are traceable all the way back to dogs imported by the 5th Duke of Buccleuch in the 1830s.

The Holden Family, head keeper Kevin Hughes and his team must be congratulated for their hard work and generosity in putting on this extremely successful 2017 Retriever Championship.

Diplomas of Merit presented to: