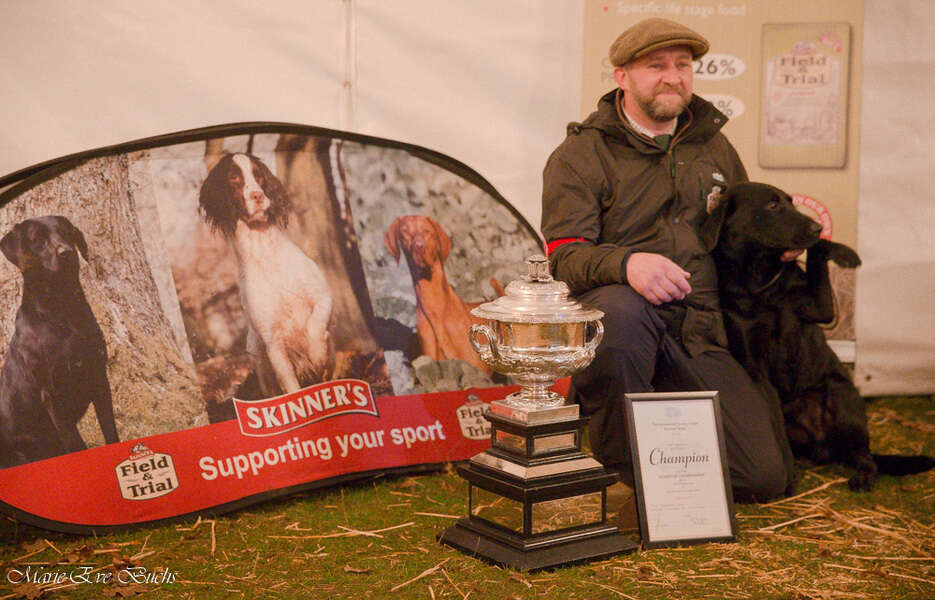 Steward of the Beat was Matt Nesbitt, Head Keeper.

2nd David Field's FTCh Artistryn Ulrich, winner of The FTCh Ulstare Style Challenge Trophy for the dog placed second and The Andrea Edwards Packington Cup for the highest placed yellow in the awards

Diplomas of Merit awarded to:

The Kingsford-Lethbridge Trophy to the breeder of the winner was awarded to Mrs A Usher.

Billy Steel Jnr, handling FTCh Harperrig Breac, won The Retriever Trials Championship Challenge Cup for the 3rd time to ensure his place in the pantheon of trialling greats. He has won previously in 1996 with FTCh Linksview Jet and in 2000 with FTCh Bracken of Berrybrae. In total Billy has qualified to run in the Championship on 23 occasions; he has been placed 2nd and 4th and been awarded two Diplomas of Merit (including one with FTCh Leadburn Mist, sire of FTCh Harperrig Breac, in 2013).

FTCh Harperrig Breac consistently demonstrated pace, style and drive in his work over the three days of the Championship. He showed that he has a nose and game finding ability second to none, picking two outstanding runners on the third day. This is a dog that any shoot would strive to have in its picking up team as the bag would most certainly be increased at the end of each day.

Matt Nesbitt, Packington Head Keeper, and his team had made excellent preparations which along with highly professional work over the three days of the trial ensured the most memorable of Championships.

Torrential rain poured down the morning of the first day as the line progressed through the bracken of the Packington Hall parkland and golf course. Brocklebank Bronze of Chatsworth made a strong start picking a difficult bird that had tucked into a drainage dyke. The weather eased off as we moved into a field of rape bordered by maize. Here FTCh Castlemans Gobi of Garronpoint’s work was of the highest standard, picking a particularly fine retrieve far behind the line in the maize bordering the corner of the rape field, one of a number of birds shot during a mini drive which dog and handler had not marked, eye wiping the first dog tried. The outstanding retrieve of day one was its last: a running partridge picked by FTCh Artistryn Ulrich as the light was beginning to fade and the scent falling away. The bird was shot in front low in front of the hedge on the edge of the fodder beet. This wasn’t markable, the dog was handled to the fall and then worked the line, correcting himself and persevering to pick the bird well over 100 yards off the fall. Dave Field picks up regularly with this dog and commented that it showed in this retrieve.

A frost marked the start of the second day. The line began in the bracken of the parkland before moving into fodder beet and then a sorghum mix. FTCh MacGiriaght Foxy Lady cleanly picked two long blinds across the fairway and deep into the bracken beyond. First time qualified handler Julia Redpath and Hassycott Sea Snipe picked two excellent eye wipes. The first was a particularly difficult retrieve, a wounded bird shot far back behind the line in the fodder beet field that had glided deep into an area of maize. Unfortunately, they were to fall by the wayside later in the day. FTCh Buccleuch Xena, the defending champion’s campaign came to an end in the sorghum when she was eye wiped by Leigh Jackson’s Laggengill Dawn of Blackgrass on a wounded hen pheasant shot some eighty yards behind the line. FTCh Castlemans Gobi of Garronpoint had another eye wipe, picking a very smart retrieve through the thick, tall hedge to the right of the line. FTCh Artistryn Ulrich also ended the day on an eye wipe, picking a bird that had been shot over eighty yards in front of the line in the wood bordering the field.

19 dogs went through to day 3. They were stretched as the line moved through bracken, white grass and woodland. Early on Donnie Leitch’s FTCh Garshake Dunbar eye wiped Nick West’s Smithsteads Layla on a long retrieve across the fairway to pick well back into the bracken. FTCh Artistryn Ulrich was neatly handled to, and held in, the area of a bird well tucked in under a fallen tree that the first dog tried had not been able to pick. David Latham was very pleased with Nettlebrae Andy of Fendawood’s retrieve on a woodcock across the full length of the line where the dog held his mark through the difficult woodland terrain.

FTCh Harperrig Breac showed his class by picking two runners as memorable as you will ever see. The first was a bird shot some 70 yards in front of the line. The dog hit the fall and took the line some 125 yards through the bracken and then out of sight over the brow beyond, an outstanding display of pure dog work. Handler Billy Steel Jnr realised the dog had picked when he heard a stop applauding and then applause from the spectators’ gallery before the dog came back into sight. The second was equally impressive. FTCh Harperrig Breac was second dog on a bird shot about 40 yards in front of the line. On reaching the fall the dog took the line over a good hundred and fifty yards through the bracken and white grass alongside the lake and could be seen hunting hard before returning with the bird.

A drive set on the banks of the long lake adjoining Packington Hall was the impressive setting for the final round of the Championship where the remaining dogs were sent for birds that had fallen in the water over 80 yards away. FTCh Harperrig Breac’s final retrieve was not without challenge. The bird required had drifted into the reeds on the far bank. The dog obeyed his handler’s commands, the first time Billy had used his whistle that final day, and picked cleanly to return with the bird and secure a decisive victory.

A special mention must also go to Lady Carter’s FTCh Asterix Aguzannis of Chatsworth. John Halsted qualified this dog to run in its 7th Championship this year (previously he qualified FTCh Ulstare Style seven times) and was successful in gaining a Diploma of Merit. The consistency of this dog is outstanding: also winning 1st place in 2015, 3rd in 2016 and a Diploma of Merit in 2012. This dog is the sire of Brocklebank Bronze of Chatsworth, placed 3rd in this year’s Championship.

In total 59 dogs qualified – 40 dogs and 19 bitches. There were 2 Golden Retrievers running.

Five dogs qualified on B qualifications (including the 1st and 2nd placed dogs).

Five handlers qualified two or more dogs; Kirsty Cousins, David Latham, John Halsted, Sarah Miles and Steve Newitt. John Halsted repeated his remarkable achievement of 2015 by qualifying five dogs and then, setting another new marker, went on to feature in the awards with no less than three of those dogs.

The most prolific sires were FTCh Copperbirch Paddy of Leadburn (notably sire of Mrs C Finlan’s FTCh Macgiriaght Foxy Lady who was awarded a Diploma of Merit) and FTCh Waterford Ganton; each had four progeny qualified.

The oldest dog to qualify was Keith Bianchi’s Kenine Pacifica of Ashlevel born in 2009. The youngest dog running was Harry Gillanders’ Ffynongain Celt.