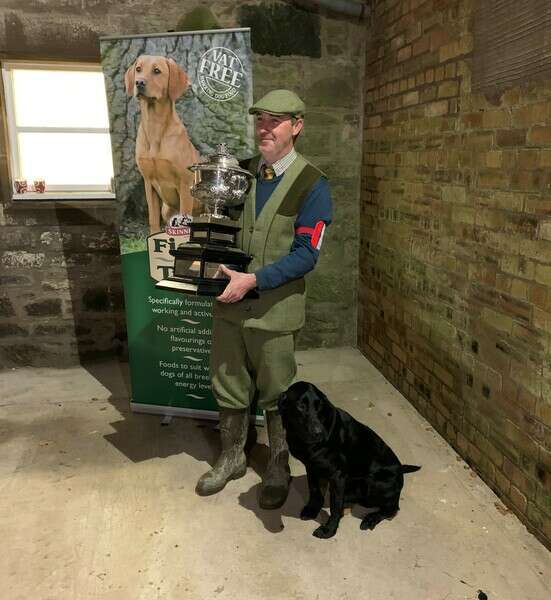 The morning of the first day was clear as the line set off in the white grass and bracken.  Judges Keith Bedford and Lynn Mitchell were on the right and Phil Parkins and Damian Newman on the left; they had decided that it was to be one retrieve in the first round.  The first bird shot was a woodcock and Leigh Jackson’s FTCh Laggengill Dawn of Blackgrass made an efficient job of picking this moving bird that had been shot into thick bracken over the brow off the right of the line. Soon afterwards Int FTCh Miller McDuff and Declan Boyle started their campaign as they were tried on a bird shot in front of the line. They did not find it and nor did Tagabea Pretty Thing of Luddesdowne handled by Kelvin Nettleingham or the judges. Int FTCh Miller McDuff was then taken over to the left hand side of the line where he cleanly picked a bird from an area that the first two dogs tried had failed to make.

It was a long Championship line and even in the first round the dogs were stretched. Richard Johnston with IR FTCh Trefaldwyn Kribensis of Shadowbreae made an impressive job as second dog tried on a woodcock shot by the extreme right hand gun positioned on the other side of a wide gully from the dogs.

Katarina Ljungquist and Meadowlark Humpty Dumpty made an excellent start in the second round, picking second dog on a bird which had been shot off the end of the left hand side and which, somewhat unusually, had moved back in towards the line.

Ffnongain Buzzard of Wauniago picked one of the most memorable retrieves of the Championship and was the first dog to earn applause from the gallery. This was on a moving bird where the dog persevered at length, working the bracken without assistance from handler Mike Jones, eventually to pick.

The afternoon came to its conclusion at a small duck pool where dogs were sent for retrieves the length of the line. Daniel Marx’s Lockthorn Ziva made easy work of a retrieve from the top of the bracken bank on the left and then down and over a fence at the bottom to pick a duck that the first dog tried had failed on.

The judges conferred and 39 dogs were through to Day 2.

Conditions were to be difficult on the second day; at times because of the mist and heavy rain it wasn’t possible to see from one end of the line to the other. The poor visibility caused problems both for the handlers, who at times struggled to see their dogs, and for the judges who may not always have been able to stretch the dogs as much as they would have liked.

Rueben Corbett with Ticefield Dazed N’Confused made an early promising start by picking behind Tony Parnell and Mordonmanor Bree of Blackharn.   As the line walked forward, on the right there was an area of cover crop fenced at the bottom of a bracken bank with grazing beyond. Mark Demaine’s Burrendale Fergie of Caytonfell produced good work once it had located the fall to work the area and pick a moving bird from this cover crop. Kevin Butler’s Turpingreen Ando was undaunted by the fenced area of game crop, unlike the first dog tried on this retrieve, and took his handler’s direction to jump and pick from the field beyond. Clare Baker and FTCh The Windbreak Whisperer of Arcklebear retrieved a pheasant from deeper back into that same field when the first dog tried had failed to settle and locate.

The judges were to eye wipe four dogs on a bird shot behind the line off the right hand side; this was a retrieve of well over 150 yards over a fence and down into a gully. The visibility was poor. It was tried first by left hand dogs W L Steel ‘s FTCh Mitforton Oscar of Leadhills and Tess Lawrence’s Hawksworth Sirooco handled by Kirsty Cousins and when they failed to pick the right hand dogs – Louie Roberton’s FTCh Mitforton Nacho and Kelvin Nettleingham’s Tagabea Pretty Thing of Luddesdowne were also tried. Forward judge Lynn Mitchell could see the bird on the ground, the last dog tried was only a few yards short but such is trialling and all were gone.

Dr Jackie Hay’s FTCh Laggengill Delta showed its local roots when sent second dog on a bird that ultimately was not found: the “English” dog tried first jumped the fiddle fence – the “Scottish” dog hardly broke pace as it ran through it.

Lady C Carter’s FTCh Asterix Aguzannis of Chatsworth handled by John Halsted showed its gamefinding as third dog on a duck which was tucked up in some reeds and white grass.

The day ended again with a duck drive and the judges decided that there were 21 dogs to be seen on the third and final day.

It is testament to the expertise and thorough preparations of Head Keeper Brian Dickson and his team that it proved no challenge to produce the game required on the last day to test the dogs put through.

The weather finally lifted and panoramic views stretching to both the east and west of Scotland could now be admired. It was now possible to see the full length of the line and for the judges to demand of the remaining dogs and handlers work of the highest standard.

Daniel Marx and Lockthorn Ziva provided the first excitement of the day when they picked behind the first three dogs tried on a long retrieve across the line in the heather. Sadly, their solid run came to an end ar their next retrieve.

Matty Lambden’s IR FTCh Tamrose Aragon was sent for a partridge shot low on the far horizon. The dog thundered to the fall area and, with only a hunt whistle from the handler, held the area and hunted to pick quickly and return with the bird - and earned well deserved applause from the gallery.

FTCh Tanyrhallt Blue Bloods handled by Jamie Bettinson showed its style, hunting hard to pick a moving bird in a plantation on the hill.

The last bird of the 5th round was picked in spectacular style by David Field’s FTCh Artistryn Ulrich. A pheasant was shot far off the end of the left hand side of the line. Handler and dog may have marked the line of the fall but it was not possible to see the fall area as it was over a brow and nearly 180 yards down the hill. Handler and dog were walked forward to be sent and once the dog was in the fall area it was left to do its job – its style in hunting the area and perseverance to pick was first class – one of the outstanding retrieves of this Championship.

The 6th round commenced and was full of drama. Declan Boyle’s Int FTCh Miler McDuff prompted loud applause from the gallery in taking a line in the heather to pick a running bird. FTCh Asterix Aguzannis of Chatsworth raced to retrieve a wounded bird and fully somersaulted as it picked off the fall.   Mark Demaine’s Burrendale Fergie of Caytonfell made an efficient job of picking behind Clare Baker and FTCh The Windbreak Whisperer of Arcklebear, a partnership which to that point had been performing strongly.

The final round took place at a duck drive on a large lake bordered in parts by rhododendron bushes where the remaining ten dogs were all tried on a water retrieve and the final placings decided. Declan Boyle’s Int FTCh Miller McDuff yet again picked cleanly, their 9th and final retrieve, so cementing their undisputed Championship success.

Subsequently, this partnership has also gone on to win, for the second year running, the Irish Championship.

Diplomas of Merit awarded to:

This year 64 dogs qualified to run - 47 dogs and 17 bitches. Four Golden Retrievers qualified. 62 competed as Scott Marland’s Greenbriar Tame was not running and W G Steel was not defending his title with FTCh Harperrig Breac as the dog was recovering from a ligament injury sustained during the grouse count.

Lady Carter’s FTCh Asterix Aguzannis of Chatsworth was qualified by handler John Halsted to compete for a record 8th time in this event. This was the oldest dog running, born April 2010, and certainly the most successful – 1st in 2015, 3rd in 2016 and awarded Diplomas of Merit in 2012, 2018 and 2019.

FTCh Eastdale Harry, FTCh Ferbury Lancelot of Smithsteads and FTCh Waterford Featherman were the most prolific sires this year; each with three progeny running.