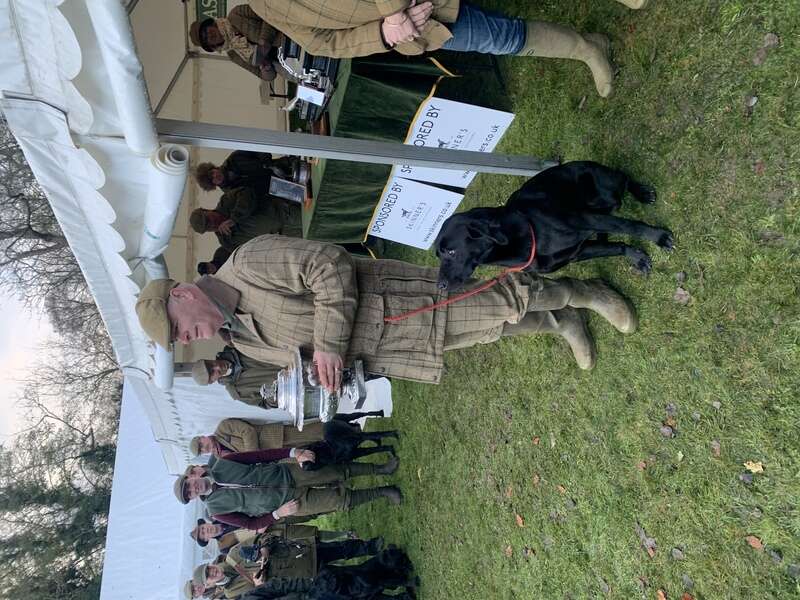 The IGL Retriever Championship is “fundamentally about excellence” and at Ampton in 2021 this was certainly the case.

A ground that had been faultlessly conceived and prepared for the three days by host Peter Rushbrook, Head Keeper Alan Hammond and landowners the Turner Family. Alan Hammond and his team of beaters and stops who patiently and precisely executed his detailed instructions as Steward of the Beat throughout the three days of the trial, flags only ever seen in the far distance. A team of guns that efficiently put the game presented on the ground. The dogs and handlers that time and time again made finds that were difficult look “simple and easy”. And excellence in breeding: a Retriever Championship where both the first and second placed dogs were by a sire that had won the Championship, FTCh Beileys Aguzannis of Fendawood (Ampton, 2016).

The Championship this year was held at the Ampton Estate in Suffolk by kind permission of the Turner Family and by invitation of Mr Peter Rushbrook of Box Tree Game Supplies on 29 November, 30 November and 1 December. The main sponsor of the IGL Retriever Championship is Skinner’s.

The guns were hosts Peter Rushbrook, his son Charlie and grandson Sam, Ben Skinner of Skinner’s, Norman Onens (placed 2nd at Out Rawcliffe in 2017 with FTCh Kestrelway Freddie), David Wall (a previous Championship qualifier), and finally Phil Parkin and Damien Newman (who have both previously judged at, and qualified  for, the Championship).

The first day dawned cold and frosty. Steward of the Beat, and Head Keeper, Alan Hammond organised the line. An area of mustard and fodder radish stretched out ahead with strips mown in the crop. This was to prove challenging ground but the judges ensured that the trial was kept even. Jamie Bettinson and Garry Ford judged on the right, Kevin Doughty and Mark Demaine on the left.

Judge Jamie Bettinson had kept his mark on a bird towered far behind the line. Unfortunately, for the three handlers and dogs taken back to try for this, they had not and it was to be picked by the judges.

Liz Taylor’s dog worked with her to pick a tricky pheasant on the edge of the mustard in an icy puddle that the first dog tried had failed to locate.

Westerkames Rigline of Brogdenview required minimal handling by Kirsty Cousins to pick a duck that had carried on and landed out of the mustard and then another seventy yards further onto the stubble the other side of the track.

Gary Wood’s Millbuies Ghillie was already showing his class and gamefinding in the first round, picking a partridge shot behind the line in the thick crop that the first three dogs tried had failed to find.

For the last retrieve of the day Tony O’Hare’s FTCh Burrendale Ace was taken tried on a bird that the first two dogs had failed on. The bird had been shot on the left in front of the line and the dog proved its memory, picking without help from the handler.

The judges took 33 dogs through to the second round. It was an overcast morning. The line was over 100 yards long in the oil seed rape. Throughout the day, dogs had ample opportunity to show their marking ability;  multiple flushes were notable by their absence.

Fraser Forbes’ FTCh Omachie Colonel of Carnochway looked smart on a long retrieve behind the line and out of the crop into the area of scrub beyond.

FTCh Stauntonvale Lemon Posset needed no assistance from handler Laura Hill to pick a mark across the line. Nor did Millbuies Ghille, swiftly and accurately picking a marked retrieve.

At times, it appeared that handlers stepped in to direct the dogs when it didn’t seem necessary but the Championship is a trial where experienced handlers don’t take chances.

Ronnie Laughton and FTCh Wytonruss Finnigan had to work hard to pick a pheasant that had gone some way towards the wood behind the line.

27 dogs were taken through to the third round. The trial continued in the oil seed rape which stretched on and on, an area of some 100 acres.

Mel Brooks’ bitch continued to show its game-finding, picking a long retrieve across the line behind the first dog tried.

The wind got up a little and the scent seemed to improve with Liz Taylor’s FTCh Tagabea Loganberry and Mr and Mrs Berry’s Berryshot Bernie handled by Jason Mayhew both winding their retrieves from afar.

FTCh Omachie Colonel of Carnochway went down the gears and settled to pick a moving partridge behind the line. For its second third round retrieve it was taken to the other end of the line where it made easy work of picking a bird that the previous dog not located.

Annette Clarke’s FTCh Castlemans Gobi of Garronpoint (placed 4th at Packington in 2018) went directly to the fall and quickly found the game where its partner dog had failed.

John Cardno and FTCh Etomanni Comanche showed great team work in their third round retrieves: they swiftly picked the second of two birds shot with absolutely minimal handling, and then did exactly the same again on their next retrieve.

Tony O’Hare’s Burrendale Bruno had marked their bird to the spot and arrived at the fall before it could move.

This was a fast moving and as exciting a day of trialling as could ever be hoped for. Seventeen dogs were through to the third and final day.

In the fourth round one retrieve was required by the judges. A long Championship line of over 100 yards set off in oil seed rape but soon progressed into a field of mustard of approximately 120 acres.

Two birds were shot on the left. FTCh Omachie Colonel of Carnochway smartly picked the first and Berryshot Bernie went directly to the second that was out of the crop and on the grassy headland. Westerkames Rigline of Brogdenview needed no handling on its mark across the line in mustard.

2019 IGL Retriever Champion Int FTCh Miller McDuff showed his class to pick a woodcock that had moved about 20 yards from the fall and in so doing ended the campaign of John Cardno and FTCh Etomanni Comanche who had been going well to that point.

FTCh Burrendale Ace went straight to the fall of a pheasant that had bounced on some 5-10 yards. The dog kept its head down, persisted in the area and finally picked.

Sixteen dogs were now through to the fifth round.

FTCh Wytonruss Finnigan was bought across the line and sent for, and found, a bird that Anningtonbay Maddi May and FTCh Tagabea Loganberry had failed to locate.

Kirsty Cousins and Westerkames Rigline of Brogdenview fought hard to pick a pheasant that had towered over 200 yards off the end of the line.

Lee Hartis and FTCh Troddenmills Full Throttle of Leacaz were taken to the other side of the line and picked behind Clare Baker’s Arklebear Caribou and HM Queen Elizabeth II’s FTCh Buccleuch Bowhill of Sandringham handled by David Lisett.

FTCh Wytonruss Finnigan was again taken across the line to be tried on a bird, this time to pick behind FTCh Miller McDuff.

Gary Wood and Millbuies Ghillie secured their Championship campaign when the dog settled with minimal handling to hold the fall and find a snipe in the mustard that Laura Hill’s FTCh Stauntonvale Lemon Posset and Mike Tallamy’s FTCh Brindlebay Brigands had failed to locate.

There are some 20 acres of lakes at Ampton and the final round saw eight dogs sit through a duck drive and then retrieve from across the water. The judges had seen enough to decide the final placings and the trial was declared over.

This is the fourth time that the IGL Retriever Championship has been held at Great Livermere. Previously it has been held there in 1988, 2006 and 2016.

54 dogs qualified this year and 52 competed for the title. Mark Demaine’s double qualifier FTCh Breckmarsh Ethan of Caytonfell did not run as Mark was judging this year. Qualifier Balleyvalley Riley was withdrawn by owner/handler John Dawson.

13 bitches competed for the title.

Tyrrellison Jafar was the youngest dog in competition (whelped 01/06/2019). Gunnerspeg Apollo and Burrendale Bruno were just a few months older.

Paula Cullis’s Flashmount Tenor of Tagabea is only the third chocolate Labrador to have competed at the Retriever Championship (Ged Leeson’s Pintail Hector of Styleside was the first in 2008 and Miss D V Walls-Duffin’s Grangemead Flint handled by Mrs D Smith-Haines ran in 2012). Paula has now handled all the colours - black, yellow and chocolate - at the Retriever Championship.

Declan Boyle’s FTCh Jake of Blackburn was a treble qualifier.

Among the handlers new to the Championship this year were Tom Birchall, Mel Brooks, John Cardno, Amy Collier (at 16 years of age by far the youngest handler but with not inconsiderable experience-she has been successfully competing since she was 10 years old), Marianne Copp, Jon Dower, Fraser Forbes, Philip Dyson, Marlene Edvinsson, Kim Jinks and Francesca Prentice.

Judge Kevin Doughty is one of only a few who can claim to have judged (on no less than three occasions), run in and shot at the Retriever Championship.

Three of the judges have featured in the awards at previous Championships: Garry Ford with FTCh Auchendolly Beaver in 1999 (DoM), Mark Demaine with FTCh Leacaz Ricky of Caytonfell (3rd) in 2017 and Burrendale Fergie of Caytonfell (DoM) in 2019 and Jamie Bettinson with FTCh Levenghyl Peacock (3rd) in 2009, FTCh Whitesmiths Widgeon (DoM) in 2011 and FTCh Tanyrhallt Blue Bloods (2nd) in 2019.

Mark Demaine's FTCh Breckmarsh Ethan of Caytonfell qualified but did not competing as Mark was judging the Retriever Championship this year.